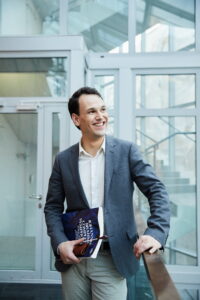 Austrian conductor and composer Kai Johannes Polzhofer was already selected for masterclasses with Daniele Gatti, Jorma Panula, Paavo and Neeme Järvi even before taking up his studies in conducting. Finalist of Only Stage Conducting Competition 2022, and Semi-finalist of Kussewitzky Conducting Competition 2021, his music has been internationally broadcast (Austrian Broadcast Ö1, Bavarian Broadcast BR Klassik, Estonian National Radio, Radio Russia), and he worked with leading ensembles of the contemporary music scene such as Grammy Award-winning Parker Quartet, Ensemble Recherche, and the JACK Quartet, the “nation’s most important quartet” (The New York Times). As a conductor he worked among others with members of Deutsche Oper Berlin and Gustav Mahler Youth Orchestra, as well the Århus Symphony Orchestra, South Denmark Philharmonic, Copenhagen Philharmonic Orchestra, Aalborg Symphony Orchestra, Odense Symphony Orchestra, the Symphony Orchestra of the Rimsky-Korsakov St. Petersburg Opera and Ballet Theatre, and with soloists of the Mariinsky Theatre Petersburg. Among others he assisted conductors Ilan Volkov, Fabio Luisi, Leonid Grin, and Thomas Søndergård.

Before Mr. Polzhofer was selected for the National Soloist Program of Denmark in Orchestra Conducting (under the guidance of Per-Otto Johansson and Michael Schønwandt), he studied orchestra and operatic conducting at the prestigious Rimsky-Korsakov State Conservatory Saint Petersburg with Alexander Alexeev †. Earlier he graduated with honors both in composition and philosophy from Musikhochschule Felix Mendelssohn Bartholdy Leipzig and University Leipzig. His principal composition teachers are Chaya Czernowin, Klaus Lang, Claus-Steffen Mahnkopf, and Steven Takasugi. He is inspired by putting music in a broader cultural context, therefore he regularly publishes articles in these fields, and released in 2016 the book “Perspectives for Contemporary Music in the 21st Century”. Further he taught at the Music Department of Harvard University, and worked as lecturer at the philosophy department of University Leipzig. In addition he has been awarded with the “Certificate of Distinction in Teaching” at Harvard University, where he completed his PhD in composition.

Active in understanding music as a key to support change in society, Mr. Polzhofer has been throughout the years active in initiating new cultural platforms. Together with Karen Cueva he is co-founder, former Music Director, and current advisory board member of the Du Bois Orchestra at Harvard (fighting racism and gender discrimination through classical music), as well as initiator and artistic advisor of forma Leipzig (fostering dialogue between contemporary music and literature).

Among others Kai Johannes Polzhofer received a National Stipend in Germany (Deutschlandstipendium), and was awarded a full scholarship from Harvard University allowing him to obtain his Doctorate. He is supported by the Monsignore Fellerer Arts Foundation as well the Stiftunglife Foundation. Since 2013 his compositions are published by Edition Gravis (Berlin).